Before Coronavirus: Crisis Response at the Weizmann Institute 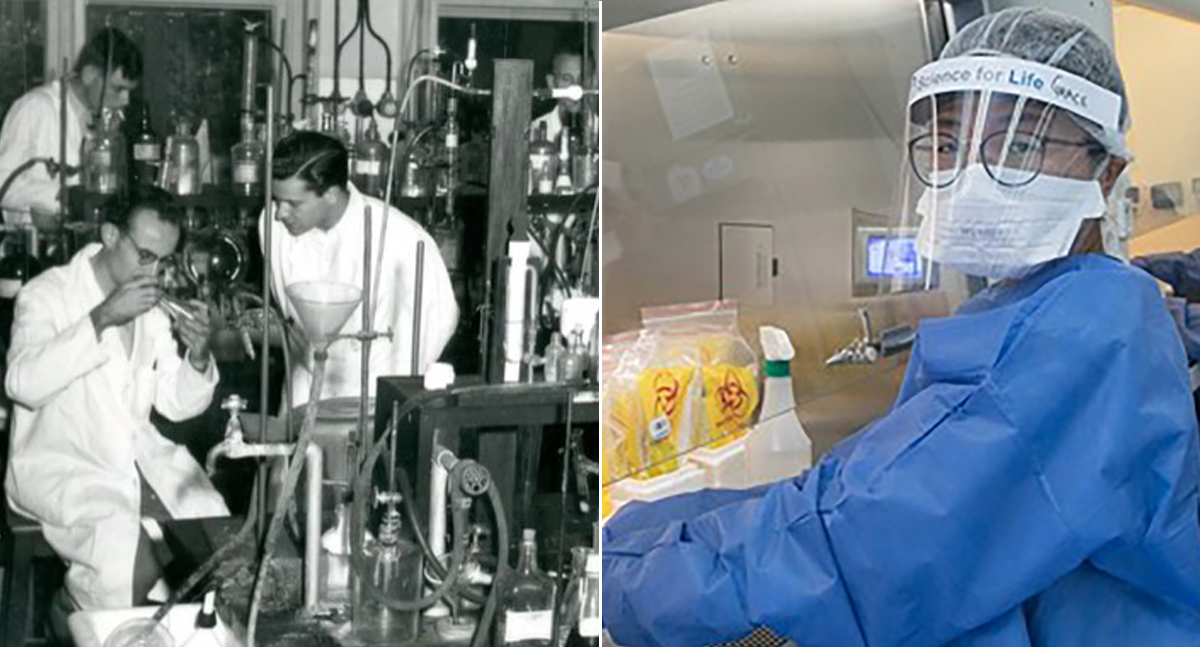 Then and now: at left, Weizmann chemists developing antimalarials and other much-needed drugs for the Allies during WWII; right, a modern Institute lab where researchers are devising ways to fight COVID.

The Weizmann Institute of Science is small but mighty, not weighed down by artificial demands and committed to giving its researchers the freedom to pursue their curiosity. Because of such flexibility, the Institute was able to immediately pivot to take on COVID-19, quickly transforming scientific labs and lines of research to focus on testing, treatment, and prevention.

But as with so much at Weizmann, it’s the people that made the difference: when the pandemic began, a single scientist, Dr. Ron Diskin, was studying corona and other viruses in his lab; today 66 out of 250 labs are doing so, meaning that over 25% of our scientists faced the crisis by doing what they do best: applying their formidable skills to tackling this strange virus.

As Prof. Alon Chen, a neurobiologist who is studying pandemic-related mental health impacts (and is the Institute’s new president) says, the response “reflects the agility and creativity of our scientists – who quickly brainstormed ways that their respective areas of expertise might elucidate some important aspect of the coronavirus.”

And it’s not just the scientists; as Chen says, the Institute’s staff, students, postdocs, and community pitched in, too, “with incredible finesse and tremendous spirit.”

However, this rapid response to a global crisis is not the Institute’s first.

During WWII, for example, Weizmann scientists also adapted their research – at that time, to create versions of drugs and other substances that were formerly imported from Germany. In addition, malaria was a serious problem for Allied troops serving in Palestine, and so, at the request of the Allies, the scientists’ efforts turned to the production of Atabrine and plasmoquine – substitutes for malaria-fighting quinine.

An accounting of drug development in Institute labs at the time reported 22 new compounds, including useful drugs such as the painkiller barbiturates Phanodorm and Evipan; Novalgin, a fever-reducer and analgesic; Rivanol, an antiseptic; and Prontosil Rubrum, an antibacterial and disinfectant. 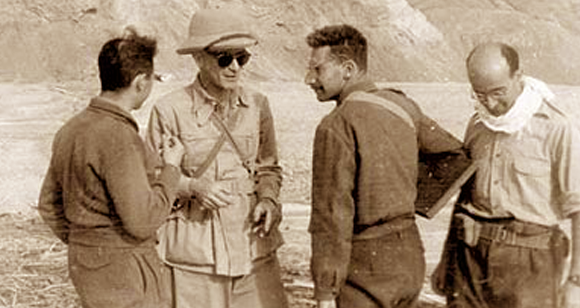 One of the Weizmann Institute’s first scientists, Prof. Israel Dostrovsky (at right), and team during a geological survey of the Negev. Their soil samples – tested in Weizmann labs – revealed ores that laid the foundation for Israel’s nuclear infrastructure.

In another urgent response to world events, the Institute officially joined the War of Independence in February 1948, although research contributions were already underway. The overt commitment let defense research come out from the shadows – and, as with COVID, many students and professors stepped up. (Ettay Nevo provides us with much of this information in a post on the Davidson Institute of Science Education’s Stuck at Home? site. Davidson is the Weizmann Institute’s education arm and, coincidentally, Stuck at Home? is its own COVID response, providing entertaining science content for kids who are, well, stuck at home.)

During the War of Independence, Prof. Israel Dostrovsky, one of the Weizmann Institute’s first scientists, established the infrastructure for nuclear research. Seeking useful ores, his team undertook geological surveys in the Negev. The Institute’s labs identified large amounts of phosphates and small amounts of uranium in the Negev samples – thus laying the foundation for the Israeli nuclear program.

Institute scientists also developed devices and solutions for soldiers on the front lines of the war. At the time, Dr. Chaim Weizmann said: “We have in our hands powerful weapons which we must use wisely and responsibly ... This weapon is science, which is the source of our strength and in which we place our trust.”

Today Weizmann scientists are fighting an invisible enemy, but will continue to deploy science – humankind’s most powerful weapon – against coronavirus … and to help stop the next battle before it begins.