In a new study, ants even outperformed computer models in finding the best way to navigate a chaotic environment – and, together, support their community 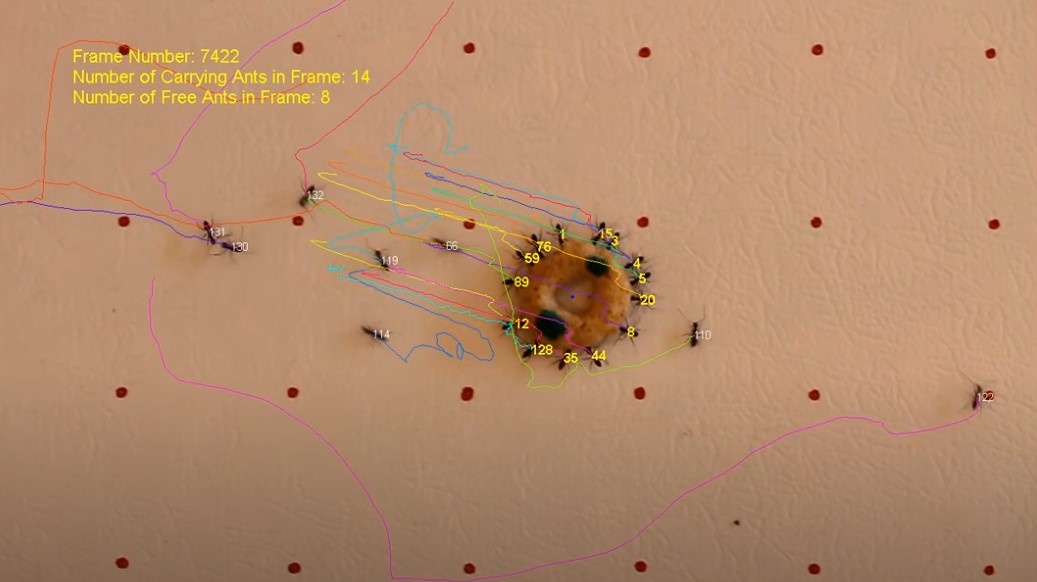 Cheerio, chaos: the ants’ movements may look random and uncoordinated, but they’re collaborating on a goal – getting that Cheerio home. Leaders are coming and going, providing feedback to guide the cereal carriers around obstacles and back to the nest. Video still from Prof. Ofer Feinerman, published in Nature Communications

Prof. Ofer Feinerman in the Weizmann Institute’s Department of Physics of Complex Systems – and what better describes ant society than “complex system?” – has long studied ants, and clearly admires them. He says that casual observance, like watching a line of ants cross a sidewalk, doesn’t even begin to reveal their sophistication: “their numbers, cooperative skills, efficiency, apparent know-how, and elegance are just too difficult to miss.”

This is why he takes a big-picture view of their Lilliputian world: “Dropping to your knees for a closer look may prove to be counterproductive: interactions are too many to grasp, individual ants are difficult to follow, and when you finally manage to focus on just one, she often appears to be somewhat disoriented.”

Taking a macro view of ants as a community led to new findings, published in eLife, showing that collective brainpower is key not only to navigation, but expanding the ants’ range.

The study participants – longhorn crazy ants – were in a semi-natural, randomized environment: a labyrinth where the team scattered cubes (representing obstacles such as stones) to study collective sensing and navigation. As United Press International (UPI) reports, the scientists then used image processing to track the movements of their tiny subjects as they searched for food.

Cheerio, chaos: the ants’ movements may look random and uncoordinated, but they’re collaborating on a goal – getting that Cheerio home. Leaders are coming and going, providing feedback to guide the cereal carriers around obstacles and back to the nest. Video still from Prof. Ofer Feinerman, published in Nature Communications

Impressively, the ants proved better than a computer model (a “randomized walk” model) at finding a clear path. In fact, as Science Daily says, the more complicated the labyrinth, “the better the ants were at solving it compared to the computer model.”

Like elderly ladies being helped across the street by Boy Scouts, ants carrying loads of food were escorted by non-load-bearing ants who helped them avoid obstacles and get back to the nest as quickly and trouble-free as possible. And when the food-carrying ants got stuck, Science Daily adds, “leader ants constantly presented the carrying group with potential crossing routes. Coordinated movement then allowed the entire group to explore the suggested routes, until they found an escape route that bypassed the obstacle.”

By bringing their combined brainpower to bear on a problem – similar to how scientists collaborate – the ants prove that we are stronger together. Solving challenges, overcoming obstacles, coping with chaos, keeping the community healthy – look to the ants for answers.

◅
Previous Post Need a Break from COVID? Here's a Cat Video from the Sobel Lab
Next Post From Israel to Chernobyl: Treating Victims of the Nuclear Disaster
▻
comments powered by Disqus