Finding Hope In – And For – Coral 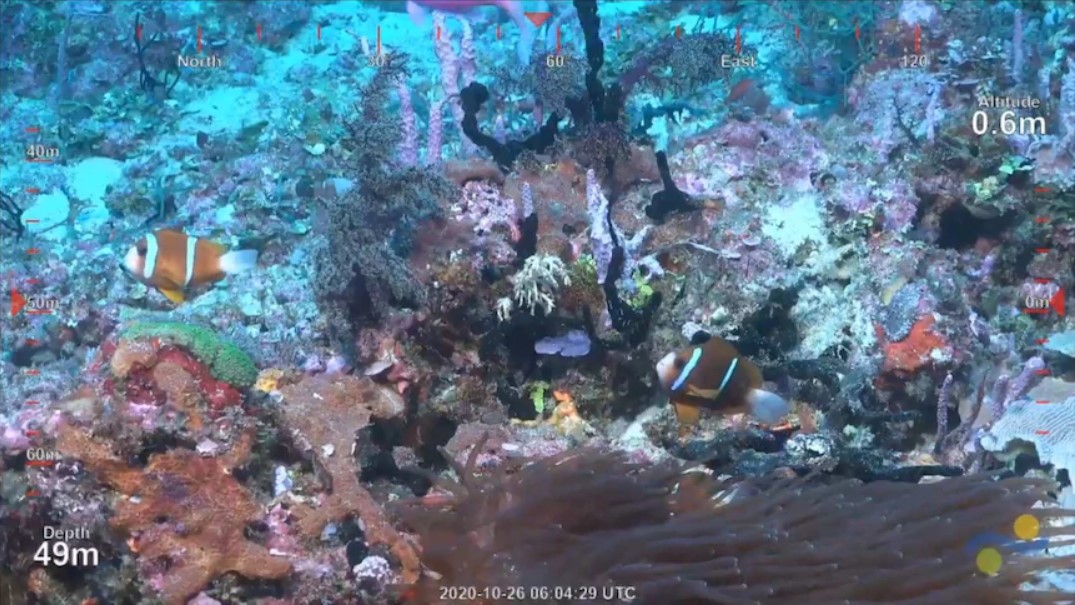 “It was a good day,” understates the expedition’s chief scientist, referring to the finding of the impressive coral structure. At its deepest part, the newly discovered reef is 20 million years old – give or take a few. Credit: Schmidt Ocean Institute

In late 2020, a team of marine scientists investigating Australia’s Great Barrier Reef came across a remarkable sight: a “detached coral feature that rises from the seabed to a height of nearly one-third of a mile,” reported The New York Times. It is “the first large new element of Australia’s famous reef system to be identified in more than 120 years.”

Coral is, in many ways, our environmental canary in a coal mine. Sensitive to changes in acidity, temperature, currents, and the like, these animals are early warning systems of climate change and its damage. Until the new finding, it felt like news about coral ranged from “depressing” to “even more depressing.” For example, in spring 2020, scientists reported that over half of the Great Barrier Reef’s corals had died since 1995, largely due to climate change-induced mass bleaching.

The new reef, however, was teeming with life. It even had a “blizzard of fish,” as a mission scientist put it. This could be due to its relative remoteness. But can this valuable, vital ecosystem stay healthy? Can other reefs be repaired and recover their own vibrancy?

That’s where science comes in. Weizmann’s Prof. Assaf Vardi, collaborating with engineers at MIT, created “coral on a chip,” an experimental platform for studying coral biology at microscale resolutions. Corals are finicky and notoriously hard to grow, and being able to study them closely sheds light on how they develop – knowledge critical to helping reefs recover. 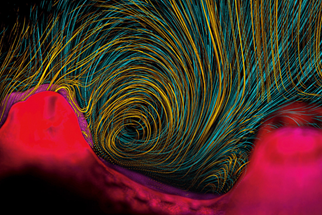 Taken during the Weizmann/MIT microfluidics study, this image of the hair-like cilia (shown in gold, green, blue) between two 3-mm coral polyps (pink, purple) shows the swirl of activity around a reef-building coral. The intricate patterns in the water are made by cilia moving in unison as the corals breathe, feed, and clean themselves

The coral-on-a-chip system, based on microfluidics technology, allows scientists to examine living coral polyps in the lab – a world’s first. Just one of the project’s many breakthroughs includes being able to track the bleaching process, cell by cell.

The Vardi lab is adapting the system to track various cycles of reef-building corals and further investigate disease and bleaching processes. “Many corals are running out of time; it is crucial to know how our actions are affecting their survival, and how they affect ours,” Vardi states.

Prof. Aldo Shemesh is taking another approach: measuring corals’ response to acidification. Shemesh, who considers corals to be historians of the environment, found that there was no baseline measurement of current conditions – information necessary for tracking acidification levels going forward.

Therefore, he and his team conducted a 3,000-mi-long ocean survey – from Eilat to the Seychelles, the Gulf of Aden to the Western Indian Ocean – to develop that acidification baseline. The data resulting from Shemesh’s first-of-its-kind ocean-wide assessment established a crucial landmark (watermark?), now widely used by other scientists, for tracking the effects of anthropogenic activity.

And Prof. Rotem Sorek, cutting-edge CRISPR researcher, added SCUBA to his skill set in order to study coral reef health. Robust populations of fish larvae indicate a thriving reef; in the Red Sea’s Gulf of Aqaba, however, the number of species and unpredictable currents made it nearly impossible to conduct routine population counts to monitor reef health. When he learned about this challenge, Sorek developed a genetic “barcoding” technique so scientists can monitor which species are present – as well as how many, what time of year, and at which depths.

Diving in the Gulf, Sorek and a team of marine biologists clipped the fins of adult fish for DNA analysis. His lab then matched the DNA to larvae, ultimately producing barcodes for over 80% of the area’s species. Now, instead of trying to visually identify tens of thousands of similar-looking larvae, scientists can simply match each specimen to its barcode, gathering vital information about reef health.

Perhaps there is hope for coral after all. And for us.

◅
Previous Post Star Frequency: Tuning In To Radio Signals from Space
Next Post Will AI Tell Us What Whales are Saying?
▻
comments powered by Disqus