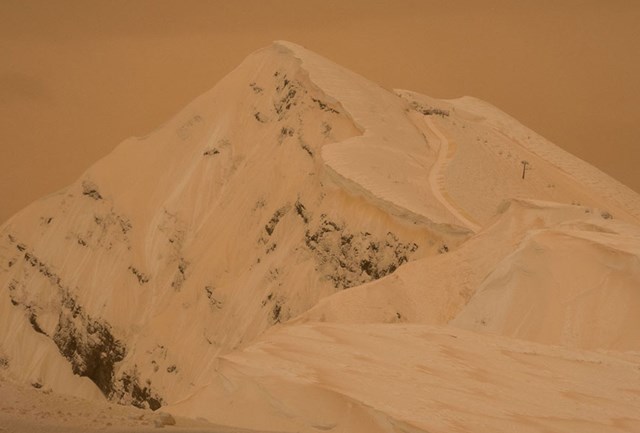 An unearthly scene is, quite literally, of this Earth. Orange snow and sky at a ski resort in Krasnaya Polyana, Russia, on March 23, 2018. Credit: Sergey Tsaun/Shutterstock

We are growing accustomed to the phenomena that our wild weather sometimes produces, but here’s one that struck us as particularly curious.

In late March, photos began to circulate that appeared to be taken with a sepia filter, but were, in fact, accurate, unadulterated images of … orange snow.

People in four Eastern European countries shared pics of otherworldly ski slopes and snowy mountains that were undeniably orange, with skiers in Sochi joking that they were actually skiing on Mars.

As artificial as the orange snow looked, however, it was the result of a natural substance: dust.

Saharan dust, to be specific, lofted into the atmosphere by storms so huge that they were picked up on NASA satellites. These wind- and thunderstorms were instigated by a polar jet stream that went farther south than usual, whipping up tremendous amounts of dust that then was pulled north.

Dust from the world’s largest hot desert is more commonly known to tint the atmosphere, not snow, orange in countries from England to Australia. As Martin Bowles of Britain’s meteorological service said in The New York Times, “It is not unusual for Saharan dust to move into parts of Europe … here in the U.K., we have occasional days (about once or twice a year) where our cars get a light covering of dust originating from the Sahara.”

Orange snow is much less common. As Mr. Bowles says, “Very rarely do we see dust being pulled up into and mixing and falling with snow in the wintertime.”

But turning things orange isn’t the African dust’s only superpower: it also feeds the Amazon rainforest.

Weizmann’s Prof. Ilan Koren, who studies the role of aerosols (tiny airborne particles, such as dust) in climate change, used NASA satellite data to show that dust from a single Saharan valley exported minerals and other nutrients to Brazil’s Amazon region. In fact, the valley, the Bodélé, comprises only about 0.2% of the Sahara’s area, yet is responsible for 56% of the dust reaching the Amazon rainforest.

Koren also determined why the Bodélé Valley is such a major nutritious-dust-provider: it’s flanked by ridges that create a sort of large-scale wind tunnel. This quirk of geography concentrates gusts of wind and accelerates them toward the ocean, where they bear the life-giving dust across the water, and even nourish marine life along the way.

Interesting, isn’t it, that dust can so radically impact elements –rainforest, snow, atmosphere – so different from itself, and so far away from its home. It’s a good reminder that, as far away as other places may seem, ours is a small, fragile, butterfly-effect world after all.

And besides, since we might be living on Mars before long, it’s not a bad idea to start getting used to an orange-tinted world.

◅
Previous Post Day Zero: What Happens When the Tap Goes Dry?
Next Post What an “Alien” Can Teach Us About Ourselves
▻
comments powered by Disqus