A World Without Coral Damages Us All

Massive back-to-back bleaching events have killed more than half of the Great Barrier Reef’s coral in just two years. Can science help? 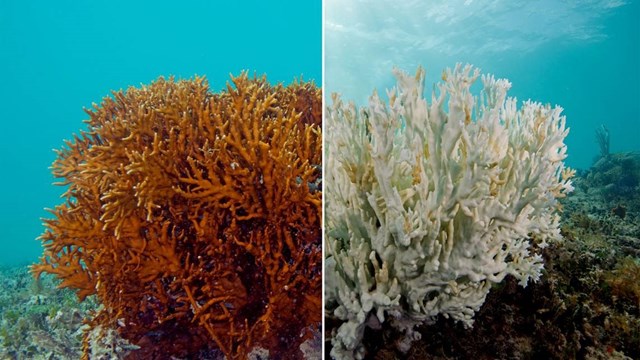 This is not a hoax: climate change is real, and it is killing coral. These Great Barrier Reef before-and-after photos show the degree of devastation that can take place in just a few months. Credit: XL Catlin Seaview Survey

The Curiosity Review remembers when we heard a distressing report last year: over nine months in 2016, Australia’s Great Barrier Reef – one of the world’s largest living entities, so tremendous that it’s visible from space – underwent the largest coral bleaching event in its history. And in April of this year, we heard such a report again when shocked scientists reported that a second huge event took place in 2017.

“Coral bleaching” sounds rather benign. Bleached corals even have an alien beauty. But bleaching = death.

Corals are living animals, the foundation of a complex marine ecosystem. When they die, dominos start falling. And we’re in that line. All life on Earth is interconnected, and when one part of the web is removed, things fall apart. (See also: honeybee colony collapse.)

CNN reports that scientists have found the cause for this dieoff: us. And Forbes says that human-caused climate change killed off half of the reef in just those two years. The bleaching also costs billions in lost tourism dollars and decimates the livelihoods of hundreds of millions of people.

Study author Prof. Terry Hughes was shocked by the devastation, but is putting some faith in the Paris climate accord. However, if those goals are not met and “warming continues apace” then, he says in The Guardian, “‘it’s game over.’”

But there is hope. (Really.)

Those scientists were the Weizmann Institute’s Prof. Rotem Sorek and his colleagues.

Gaining a deeper understanding of the reef ecosystem and health is key to saving it, but studying live corals is a problem: they don’t like lab life and are too big to image, meaning scientists don’t know what’s happening on the inside. As our Prof. Assaf Vardi told The Scientist, “It’s a black box, in terms of what actual microscale processes are happening there.”

He and a global team of collaborators created a way to open that box. By capturing individual coral polyps and creating a micro-aquarium “fit to house the world’s tiniest reef,” Vardi’s team could watch them in vivo with a microscope.

“Many corals are running out of time; it is crucial to know how our actions are affecting their survival, and how they affect ours,” Vardi says. (See a stunning image he and MIT’s Environmental Microfluidics Group produced of water moving around coral, shedding light on how the animals stay healthy and respond to environmental changes.)

Climate change is no hoax; ask the coral. We need to support the scientists who are doing the good work – the work that might save these animals, the sea … and us.

◅
Previous Post Are These Ocean-Dwellers the Future Shape of Humankind?
Next Post Meet Steve, the Purple Atmospheric Phenomenon
▻
comments powered by Disqus