Are These Ocean-Dwellers the Future Shape of Humankind?

The deep-diving Bajau people have genetically evolved for life underwater 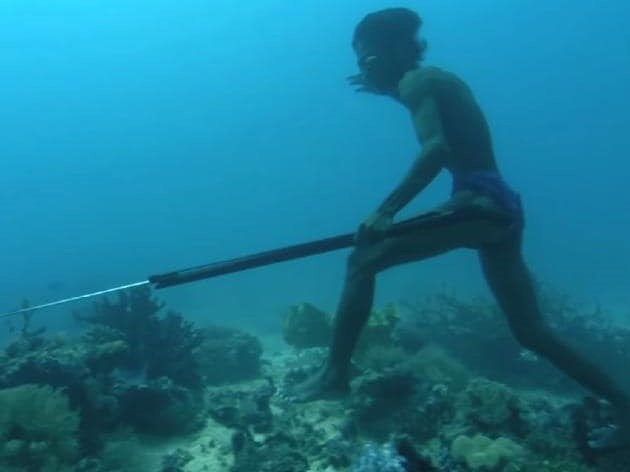 The life aquatic with the Bajau: The islanders have evolved to remain underwater, at depth, for extended periods – even walking on the sea floor. Credit: BBCone

How long can you hold your breath underwater? If you’re untrained, it’s about 30 seconds. With practice: a minute, maybe two. But you’ll never be a Bajau.

A new study shows that these Southeast Asian ocean-dwelling people have changed genetically, enabling them to easily hold their breath for up to 15 minutes at a time as they drop to the ocean floor to dive, spearfish, or collect shellfish. Quoted in The Atlantic, researcher Dr. Melissa Ilardo says: “Underwater, the Bajau are as comfortable as most people are on land. They walk on the seafloor. They have complete control of their breath and body.”

This is evolution in action. It was long thought that such processes moved at too glacial a pace for us to witness, but today – thanks to ever-finer technologies – we can see evolution at the human scale.

The research grew out of Ilardo’s curiosity about the Bajau, wondering “if centuries of diving could have led to the evolution of traits that made the task easier for them,” reports The New York Times.

Indeed, her study revealed that the Bajau are a case of rapid evolution; over the finger-snap course of about 1,000 years they achieved the ability to freedive to extreme depths – 230 feet is common.

The work focused on the spleen, which plays a role in oxygen circulation; as The Times says, “an enlarged spleen seems to function like a bigger scuba tank.” And it turns out that the Bajau, like many marine mammals, do indeed have larger spleens – about 50% larger, in fact, than inland farmers on the same island.

But it wasn’t diving practice alone that awarded the Bajau this bigger scuba tank; non-diving Bajau had the same oversized organ, so it is clearly due to genes, not lifestyle. In fact, Ilardo discovered a genetic variant – PDE10A – related to the enlarged spleen. Bajau with one copy of PDE10A had bigger versions than those with none – and people with double copies had even more spleen.

Nature likes to experiment with doubling, from the PDE10A gene to entire genomes. In her own research on evolution and oxygen – using yeast, whose fast-living ways make them excellent evolution-research subjects – Weizmann geneticist Prof. Naama Barkai found that yeast that underwent genome doubling millions of years ago apparently gained a superpower: they could grow and multiply without oxygen.

Apparently, a genetic change during the doubling dramatically altered the yeast’s oxygen requirements.

Why a yeast would evolve to live without oxygen is still a mystery, though it would certainly give that species a clear advantage over its non-doubled cousins if there were a radical change in the composition of Earth’s atmosphere.

And the Bajau? Some propose that they adopted their life aquatic when late-Ice Age sea-level rise swamped Indonesia. Their past adaptations could certainly prepare them for the future: while the rest of us are clinging to the few remaining palm fronds as the rising water laps at our heels, the Bajau will be walking under the sea, perfectly at home.

◅
Previous Post Kilauea and Keck: The Volcano and the Telescopes
Next Post A World Without Coral Damages Us All
▻
comments powered by Disqus