Kilauea and Keck: The Volcano and the Telescopes

The Big Island’s observatories are crucial to astrophysics research 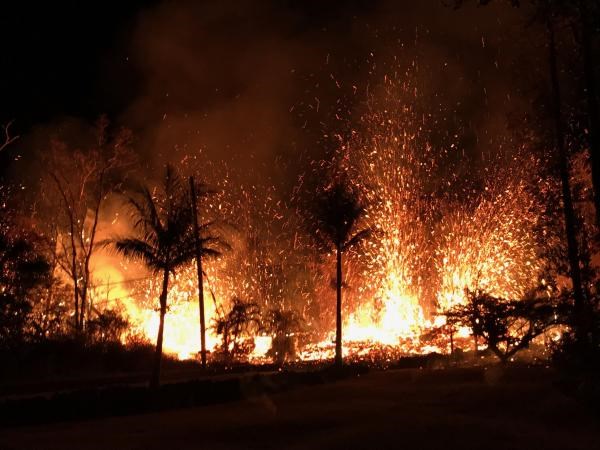 You have likely seen the stunning images of Kilauea erupting on Hawaii’s Big Island – the 2,000-plus-degree lava inexorably consuming everything in its path, the mighty expulsions of fire and matter.

But there’s another reason to keep an eye on the eruption: the island’s telescopes. The Big Island’s mean elevation of 3,030 feet and its crystalline skies – typically calm, dry, and free of light pollution – make Hawaii prized by astronomers, including those at the Weizmann Institute. Indeed, some of the world’s most busiest, most powerful telescopes live on the Big Island, not far from the erupting Kilauea, with the W.M. Keck Observatory perhaps the most famous.

Keck’s twin telescopes and others are (wisely) sited on Mauna Kea, a volcano with a very low risk of eruption. However, the Big Island is not that big, and the Kilauea-eruption-related earthquakes have damaged Keck I’s delicate mechanical bearing system, critical to keeping the telescope centered as it rotates. Keck II has not been damaged, though that could change with the ongoing eruptions; both ’scopes are closed until repairs are made and environmental conditions have resolved. Hopefully they will be up and observing again soon.

The Keck Observatory has played a starring role in multiple breakthroughs by Weizmann scientists. As Quanta reported on one recent discovery, “By sheer luck, a team of supernova hunters had already pre-booked time on the massive Keck Telescope in Hawaii for that same night. They had been planning to make a completely different set of observations, but now Ofer Yaron, an astrophysicist at the Weizmann Institute of Science in Israel, and his collaborator Dan Perley, a researcher at the California Institute of Technology, pointed Keck at the flare.” And Yaron’s team saw, for the first time in human history, the last few hours of a supernova’s life. Their results overturned long-held beliefs about how supernovas behave and die.

And our Prof. Avishay Gal-Yam wrote in Scientific American about “being granted a single night of observing time” on Keck’s then brand-new twin telescopes, acknowledging the considerable role that luck – the “weather gods,” happening to look in the right place at the right time – plays in astrophysics. And he and his colleagues did get lucky “as a result of [their] Hawaiian adventure,” with revelations including the existence of stars of at least 200 solar masses, which was previously thought impossible.

Astrophysicists’ Hawaiian horizons may be expanding: a massive new 30-meter telescope, the TMT, is planned for Mauna Kea. It will be far larger than the world’s current largest visible-light telescope, and produce images “more than 12 times sharper than those from the Hubble Space Telescope.” However, its construction is being challenged by Native Hawaiians who hold Mauna Kea sacred.

Some Hawaiians see, in the current volcanic eruption, the hand of Pele – the volcano goddess who causes eruptions in order to reclaim her land. And while Mauna Kea is considered dormant – for now – Native Hawaiian protestors have been arrested at the TMT site while praying to their ancestors and the mountain gods. Will Pele intervene in the use of Mauna Kea for scientific exploration, or will she continue to lift us up to seek the stars?

◅
Previous Post What an “Alien” Can Teach Us About Ourselves
Next Post Are These Ocean-Dwellers the Future Shape of Humankind?
▻
comments powered by Disqus