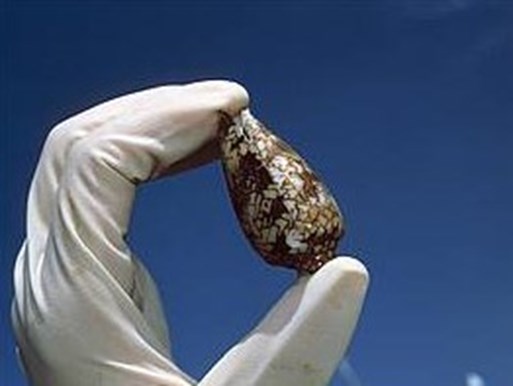 Armed and ready, the hunter senses that prey is approaching. Once the victim is within striking range, the hunter lets its poisonous harpoon fly, spearing and tethering its victim and pulling it ever closer as the toxins do their paralyzing work. The prey, immobilized, is eaten alive.

Nature can be brutal, but the harpoon-and-paralyze feeding methods of the cone snail are particularly nightmarish. And impressive: this slow-moving predator can eat fish many times its size, and its poison can be strong enough to kill people. (Cone snail shells are strikingly patterned, and collectors sometimes pick up shells that are, alas, still inhabited.)

However, what can kill can also sometimes heal. This is nothing new; many medications are based on something dangerous found in nature. The key to turning something from enemy to friend is finding its mechanism of action, at which point scientists can work toward an effective, helpful treatment.

And that’s what recently happened with cone snail toxins. As published  in the Proceedings of the National Academy of Sciences (PNAS), the Weizmann Institute’s Prof. Eitan Reuveny and his team found that cone snail toxins don’t work the way other venoms do – and showed how they do.

Most venomous animals paralyze their victims via the “cork in the bottle” technique: the toxins plug the opening, or pore, of the channels that lead potassium ions into and out of the cell. Not so the cone snail: as the Xinhua news agency reports, Reuveny found that, instead, the snail’s venom disrupted the hydrogen bonds within the potassium channel in such a way that the pore actually collapsed.

Reuveny’s discovery sheds new light on the way potassium channels are regulated in nature and provides information valuable for drug design, potentially leading to ways to fight side effects of potassium-channel-blocking drugs – such as those for heart arrythmia and hypertension – and lead to better medications. 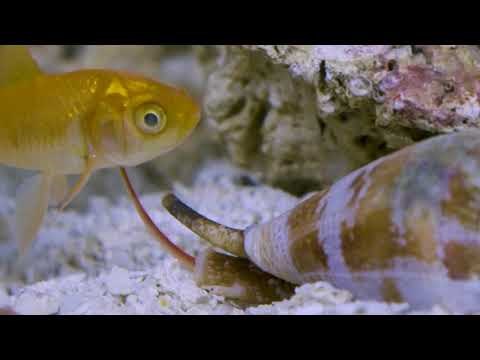 A cone snail harpoons and paralyzes a hapless passerby

One reason cone snail venom is so interesting to scientists is that it contains hundreds of compounds, and venom peptides each target a specific nerve channel or receptor – meaning one that works on the heart will not affect the brain, etc. This superpower is the basis of drug development for conditions from Alzheimer’s to cancer to chronic pain. As a PBS Nature story says, “Tropical cone snails may contain the largest and most clinically important pharmacopoeia of any [group of animals] in nature.”

Another poisonous plus: the Reuveny team’s initial goal was to develop “natural pesticides that would kill pests without harming humans,” says Dr. Izhar Karbat, given that “certain components of the cone-snail venom kill insects but not mammals.” We hope that aspect of the research will advance, too; reducing toxins in the environment is good for everyone and everything.