Followed by a Moonshadow: The Great American Solar Eclipse 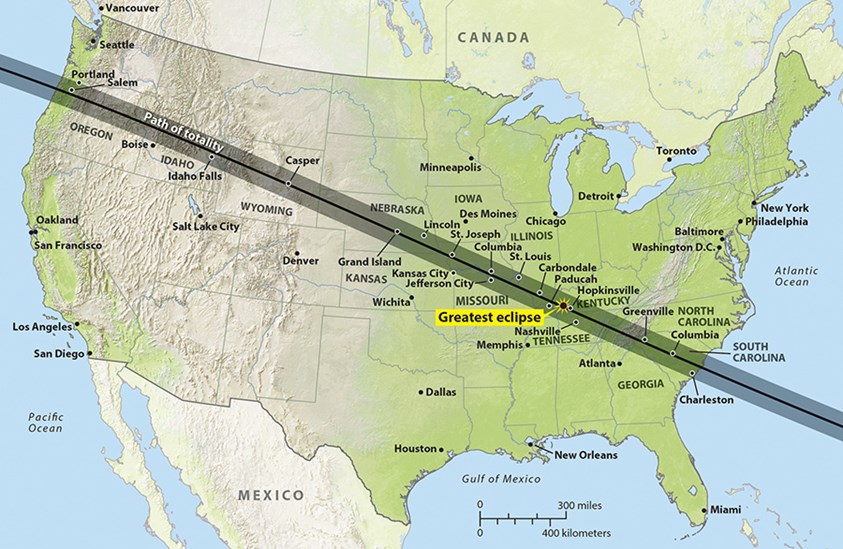 What will you be doing on August 21? If you’re like millions of other Americans, you’ll be watching the first coast-to-coast solar eclipse since 1908.

Over 12 million of us are lucky enough to live within the 70-mile-wide band of “totality” – when the moon will cover 100 percent of the sun – which will cut a diagonal swath across the continent, beginning a bit south of Portland, Oregon, then sweeping across the country before heading out to sea from the South Carolina coast.

Those of us outside the band of totality will have to make do with a mere partial eclipse of varying degrees; here in New York City, Curiosity Review can’t wait until 2:44 pm on the 21st, when we can watch a thrilling 70 percent of the sun vanish! Find out when you should be watching (safely, of course) with NASA’s interactive map.

During a solar eclipse, you’re standing in the shadow not just of the moon, but of countless scientists, priests, artists, kings, and peasants, many of whom saw signs and portents – as well as inspiration – in the seemingly supernatural event. Today we know the eclipse for the routine-yet-remarkable event that it is and can lay superstitions to rest. If you’re pregnant, the eclipse won’t cause your child to be deformed. Food and water won’t be tainted. A hangry bear didn't bite the sun. No, your dog doesn’t need special glasses.

Not only should you not cower indoors, but get outside and bask. Few other events so deeply prove that we are part of a universe both vast and intimate, spinning through it with other rocky little outposts and fiery balls of gas.

And if you’re lucky enough to be within the band of totality, you’ll see something truly special: the sun’s corona. This burning ring of plasma isn’t visible except during a total solar eclipse. You can even look directly at it – just stop as soon as the merest sliver of sun reappears.

Otherwise, you must protect your eyes from solar rays. NASA’s official 2017 eclipse website offers detailed information on safely watching the event. You can even make your own pinhole projector … with your hands! The National Science Foundation explains how.

At the Weizmann Institute, rather than gaze at the sun, astrophysicists look instead at the heavenly body that occasionally covers it. And they’ve busted some scientific myths about the moon – including, as covered in The New Yorker, its origins. They’ve studied its movement to reveal the truth behind an old pop-culture trope: why we see “the man in the moon.” And as part of Israel’s team in the Google XPrize race to land a craft on the lunar surface, Weizmann scientists are gearing up to study the moon’s magnetic field.

Of all the reasons to take a moment on August 21st to witness the brief alignment of the sun, moon, and Earth, perhaps the best is that it could literally be a once-in-a-lifetime event.

Besides, according to The Washington Post, “Mike Kentrianakis, the solar eclipse project manager for the American Astronomical Society, calls it ‘the most gorgeous natural wonder you will ever see’ … ‘If it strikes you hard enough, you will never be the same.’”

So go to a NASA viewing event, throw a viewing party, be a citizen scientist, or just head to your rooftop or yard – and prepare to be awed.

◅
Previous Post Women Taking On the World
Next Post What Do Your Bones, Wedding Bands, and Atomic Bombs Have in Common?
▻
comments powered by Disqus