Cryo-electron microscopy let scientists look deep into the scallop’s eye (eyes, actually; each scallop has hundreds), where they saw a stunning “space-age” array of living mirrors 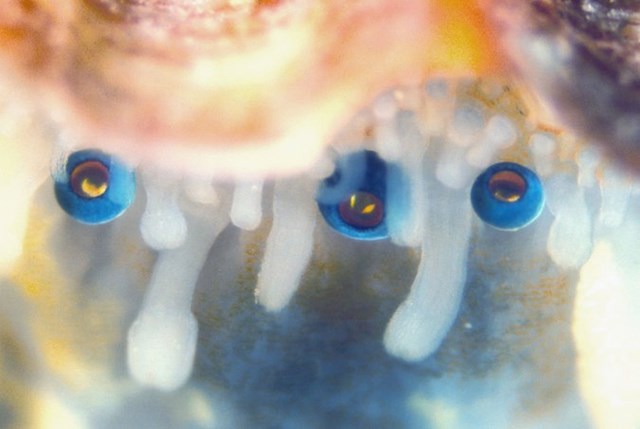 Sure, your eyes are lovely. But you only have two. The scallop has up to two hundred. And they’re of an incandescent blue with purple and gold centers; like so much of ocean life, they’re so otherworldly as to seem truly alien.

But as if it weren’t interesting enough that scallops have upper and lower rows of these poppy-seed-sized peepers circling their bodies, recent Weizmann Institute (Israel) and Lund University (Sweden) findings, published in Science, show that the eyes are a “master class in precision engineering,” as The Atlantic put it.

To make their discoveries, Weizmann’s Prof. Lia Addadi and her team – including Prof. Steve Weiner – used a new imaging technique, cryo-electron microscopy, that has such tremendous potential that three of its developers won the 2017 Nobel Prize in Chemistry. As the Nobel committee said, the technique lets researchers “freeze biomolecules mid-movement and visualise processes they have never previously seen.”

Cryo-electron microscopy turned out to be particularly well-suited for scallops’ eyes, which can be easily squished, thus losing their shape, and tend to dry out under powerful microscopes. The super-fast super-freezing keeps the delicate structures in place, enabling the scientists look at the eye in its natural state.

As Weizmann’s Dr. Benjamin Palmer told The New York Times, “we knew this would be something cool,” but the team was still surprised by what they saw.

For example, it took some of our smartest engineers decades to figure out how to make deep-space telescopes more powerful by using arrays of mirrors that work together to focus light. But scallops were ahead of them, having developed even more complex mirror arrays literally ages ago.

And today’s space engineers build each mirror out of individual tiles – but scallops did that first, too, using a shape never before seen in nature: flat squares of guanine crystals. Furthermore, unlike those we humans make, the scallop’s mirrors are alive.

It’s not surprising to find other undersea adaptations in space: e.g., NASA has been working with lobster-eye optics for years, and now plans to use them to help detect gravitational waves.

Palmer hopes that “scallop eyes may provide inspirations for new inventions,” reports The Times. “His study shows that scallops have evolved a mastery over forming crystals, guiding them into shapes that researchers didn’t think possible.”

Despite all this insight, scallops are still bivalves of many mysteries. Addadi says that “we still don’t know exactly what the scallop sees through its 200 eyes.” This is particularly curious since “the animal supposedly has no brain.”

For a brainless creature, the scallop has certainly evolved into a sophisticated engineer, likely to bio-inspire scientists across disciplines – and is beautiful to boot.

Respect the scallop. Who knows what they’ll teach us next?