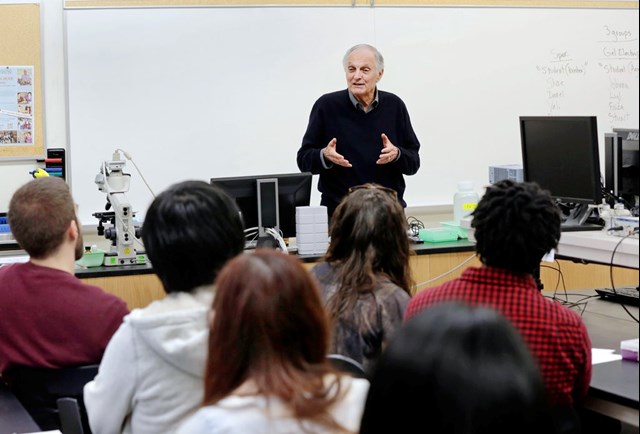 Ardent science-communication advocate Alan Alda recently shared that he has been diagnosed with Parkinson’s disease. With his willingness to be open about this terribly intimate illness, Alda has made another investment in his work to increase the general public’s level of scientific understanding – as well as raise awareness of the disease.

Alda, also an actor, has long been fascinated by science – as a child, he says, he was equally interested in science and the arts. However, given the educational split between these fields of study, he felt he had to choose. As he told The New York Times, he chose the arts; after all, he said, “I knew I had to be a writer and actor — I’d been preparing for that since I was 8.”

Today, at 82, he is using his artistic talents to promote science: besides having appeared on shows such as “Scientific American Frontiers,” he cofounded and teaches at the Alan Alda Center for Communicating Science at SUNY Stony Brook, where the course offerings include improv for scientists.

He also shows off his SciComm chops as a participant in the World Science Festival, often alongside physicist Brian Greene – one of today’s finest science communicators, in The Curiosity Review’s admiring opinion. (Greene is also a friend of the Weizmann Institute and was a keynote speaker at our 2014 Global Gathering.)

And now, by talking frankly about Parkinson’s disease, Alda has become perhaps the ultimate science communicator, using himself and his award-winning talent to expand laypeople’s knowledge of neuroscience, neurodegeneration, and genetics, biochemistry, and more.

Parkinson’s is a progressive neurodegenerative disease, and the symptoms of its onset may even seem trivial. In Alda’s case, the sign was restless dreaming – and, thanks to good science communication by Jane E. Brody, he got an early diagnosis. Brody’s article in The New York Times, “Looking for Parkinson’s Sooner,” reported that “REM sleep behavior disorder, characterized by a tendency to act out one’s dreams while asleep, is one of the strongest prediagnostic symptoms” of the disease.

Alda read the article – and took himself to the doctor. “By acting out your dreams, I mean I was having a dream that somebody was attacking me and I threw a sack of potatoes at them … but what I was really doing is throwing a pillow at my wife,” he told the Times. Soon after, he noticed that his thumb was twitching – and got his official diagnosis.

Parkinson’s has no known cause, though most scientists and clinicians believe a combination of genetic and environmental factors are involved.

Combinations of factors are one of the Weizmann Institute’s specialties – our scientists love blurring the borders between disciplines – and our Parkinson’s work is no different.

Noam Sobel, for example, studies our surprisingly complex sense of smell; the faulty function of our olfactory system can be an early sign of neurological and cognitive deteriorations. For example, a well-known symptom of Alzheimer’s is mistaking the smell of chocolate for that of oranges, and smell is also altered (or gone) in Parkinson’s. Sobel’s discoveries include a means of “olfactory fingerprinting” that could be used as a Parkinson’s diagnostic method.

And Michal Schwartz, the world-renowned neuroimmunologist who discovered the link between the immune system and the brain, is developing a vaccine that shows promise in slowing, stopping – even reversing – the progress of diseases such as Parkinson’s.

Molecular geneticist Maya Schuldiner has found a “detergent” to clean out the clumps of misfolded proteins seen in Parkinson’s and other neurodegenerative diseases, and “might be a simple and effective ‘chemical’ remedy.”

Thanks to the willingness of high-profile people like Alda to discuss their Parkinson’s – in fact, he has been on a bit of a “Parkinson’s tour,” appearing in and on many platforms – our understanding of the disease will only increase, which means that cases of early diagnosis will likely increase, too.

After all, the sooner Parkinson’s is identified, the better the outcome. As Alan Alda knows, science communication can actually change lives.