Seeing Titan, a “Most Earthlike” Moon, in a New Light

Although the Cassini spacecraft was destroyed in 2017, the intelligence it sent back is still being analyzed – and is revealing new worlds 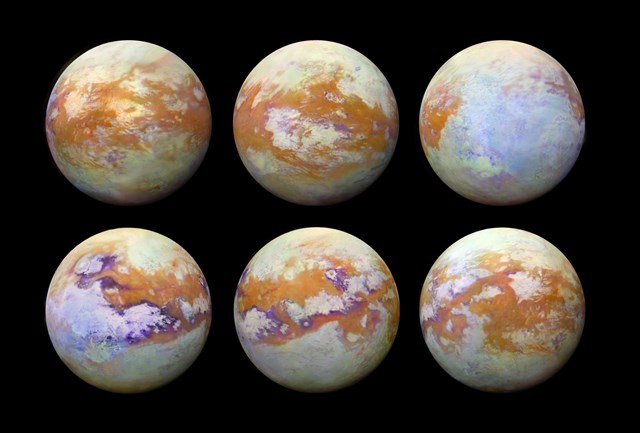 Titan-ic accomplishment. It took scientists 13 years to create these six new images of Titan, which incorporate layers of data from various angles of approach and light. Credit: NASA/JPL-Caltech/ University of Nantes/University of Arizona

Last September 15, the Cassini-Huygens craft went obediently to its death, burning up in Saturn’s atmosphere. Its 20-year mission was more successful than scientists had hoped, and they will spend many years studying its data about the mysterious planet and its many, equally mysterious moons – such as Titan.

That means that we’ll periodically get treats like the six recently released infrared images above, which took NASA only 13 years to create.

The information for the images came from Cassini’s Visual and Infrared Mapping Spectrometer (VIMS) instrument. Weizmann Institute scientists used VIMS to help create the first topographic map of the entire moon, “giving researchers a 3-D tool for learning more about one of the most Earthlike and interesting worlds in the solar system,” says NASA.

Titan has a hazy atmosphere, which made imaging a particular challenge (and is part of why scientists were so curious about what lay beneath) – that’s why the infrared was so important. It can see right through the veil.

Other Cassini discoveries that Weizmann scientists helped make include the source (spoiler: lots of smaller storms) of Saturn’s massive polar cyclones and the length of a Saturnian day: 10 hours, 32 minutes and 45 seconds.

Saturn is a gas giant, while Titan, its largest moon – Titan is actually larger than the planet Mercury – is rocky and icy. Despite its inhospitably, Titan is considered planetlike; for example, it has liquid bodies. The VIMS profiles allow scientists to model where – and how – the moon’s rivers flow, and the distribution of its methane rainfall. (And we thought acid rain was bad!)

The six images of Titan are seamless, as the scientists blended layer upon layer of data from different flybys under a range of light conditions and approaches, producing a “collection of images [that] is by far the best representation of how the globe of Titan might appear to the casual observer,” says NASA.

Titan is the only body in our Solar System besides Earth to have liquid on its surface, which has led to speculation about its potential to harbor – maybe even host – life. Weizmann’s Oded Aharonson, who has taken part (remotely) in numerous extraterrestrial missions, is particularly interested in that liquid, especially the lakes; in this TEDx talk, “Titan – A World Both Strange and Familiar,” he shares some of the mission’s findings, such as his discovery that the lakes are shrinking.

Quoted by Dennis Overbye in The New York Times, Aharonson said that the evaporation rate “sends a strong message about what the lakes are made of, namely pure methane, as opposed to heavier ethane or some other chemical, which is less volatile.” Overbye further wrote, “The discovery that Titan’s lakes are evaporating … suggests that there are active weather and geological cycles on Titan analogous to those on Earth.”

Aharonson said of his shrinking-lake breakthrough: “This is a wonderful opportunity and rare in the solar system” – a statement that applies beautifully to the Cassini mission as a whole.

It may have plunged to a fiery demise in Saturn’s upper atmosphere, but as the new data – and its resulting images – show, Cassini lives.