We are inspired by Prof. Ron Milo, who walks the talk – and now has a small army of garbage-collecting volunteers 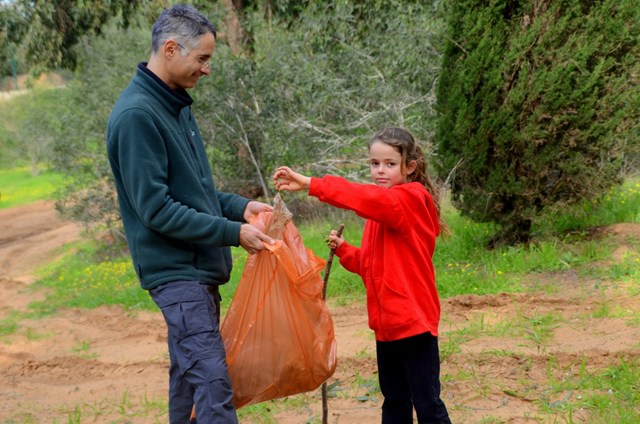 “I take every opportunity to clean up,” says Ron Milo, seen here with a helper as they collect trash along a trail. “It fills me with joy ... Our call is for people to take responsibility.”

There is always a flurry of environmental awareness activity around this time of year, with Earth Day and spring both making us more tuned in to our world. But being tuned in can be dispiriting, thanks to the relentless drumbeat of bad environmental news.

While there are signs of hope – the increased banning of plastic bags, utensils, and straws; the popularity of bicycling – it can sometimes feel like too little, too late.

What to do when the damage feels overwhelming? In an article unsubtly titled “Total Rubbish: Why is Israel So Filthy?,” Haaretz has some advice: “To counter the depression, it is worth talking to Ron Milo.” To that we add, “And follow his example.”

Milo is a very busy scientist: a member of the Department of Plant and Environmental Sciences and director of Weizmann’s Sustainability and Energy Research Initiative, his work brings the tools of systems biology to bear on the challenges of sustainability. 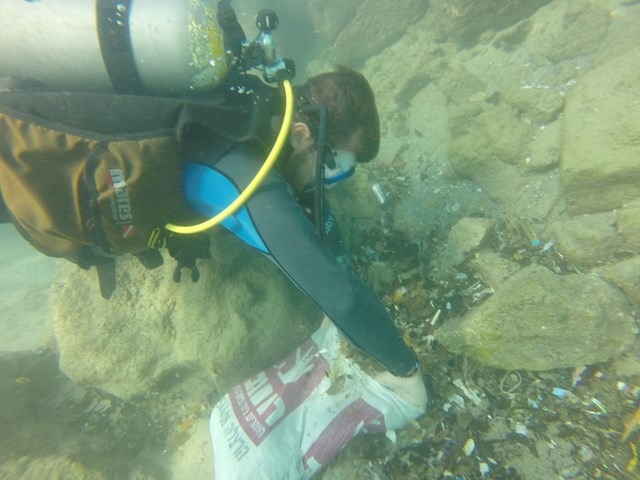 Going where the trash is: 21 students – including a scuba diver – from the IDC Herzliya Student Council collected 20 bags of trash at (and offshore) Acadia Beach

This may sound esoteric, but its impacts are understandable: real-world issues such as the effects of eating animals versus vegetables and the degree to which humans have affected the global diversity of living things. His research often makes headlines in popular media, and his article on biomass diversity was one of 2018’s top 10 science papers.

Given all this, Milo could honestly sleep soundly, his environmental conscience clean. But he walks the talk – literally.

Tired of Israel’s littered landscapes, Milo, an avid hiker, established a program called “Bishvilenu.” A pun in Hebrew meaning both “for us” and “on our paths,” Bishvilenu encourages Israelis of all ages to adopt a path or area and take responsibility for keeping it clean. (The site is in Hebrew; this English version is courtesy of Google translate, and The Curiosity Review takes no responsibility for the quality of the translation. Still, you’ll get the gist.)

Like many big ideas, Bishvilenu started small. Soon after joining the Weizmann Institute in 2008, Milo and Dr. Dima Batenkov of the Department of Mathematics sought to create a green campus, but quickly grew beyond Weizmann’s borders. Bishvilenu now covers the country.

A systems biologist through and through, Milo based Bishvilenu on a concept called “gamification” – getting people involved by making something fun, even competitive. The social aspect is key, with participants posting photos and cleanup updates and checking out what others have done.

Milo himself goes trash collecting at least once a week – alone, with his family, with his lab team. “I take every opportunity to clean up.”

As he explains in Haaretz: “It hurts me to see that the country is so dirty … Our idea is simple; work in your own area, and don’t try to persuade anyone. Just go out and clean.”

The payoff? “It fills me with joy; I just love it. Our call is for people to take responsibility.”

And the idea is still growing: Milo, Batenkov, and another “cleaning patrol” have established a think tank to develop solutions and instill a culture of cleanliness. Government agencies, environmental groups, community centers, and the like have all gotten involved.

Why not find your own joy and adopt a path? Block? Neighborhood? “Just go out and clean.”